I am an educator, storyteller, and musician by trade and calling. My love for storytelling began as a child. I spent hours in our basement typing my own versions of Greek myths and adventure stories. I studied comparative religious studies, became a professional musician, worked as a teacher for adults and then children. Over the last few years I’ve studied with several important and influential storytellers like Richard Tulloch, Nial de Búrca, Chris Smith, and Adam Guillain. My qualifications as a Storytelling Method trainer were attained at the Storytelling Schools in Oxford, UK

Since 2006 I have been working as an adult educator. I began coaching in English with a special focus on Public Speaking, Moderating, and Pedagogy or Train the Trainer methods. Here is where I rediscovered my love for storytelling. I began working as a storyteller and as well eventually started running workshops and seminars for teachers and educators. Furthermore, I also started working with students or pupils in the classroom providing storytelling projects. 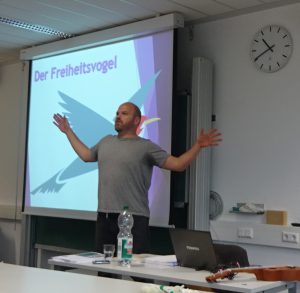 In 2008 I began working at various primary schools in Bonn and throughout the Bonn-Cologne-Düsseldorf area. Although I’ve taught all of the primary subjects, my specialties were English and Music. Several of those years I spent travelling with a group called “Die Minimusiker“ with whom we provided music recording projects for primary school, kindergarten and preschool children.

In the United States I worked as a professional musician and between touring I would work with several literacy and music projects at various primary schools in Atlanta. During this time many of my rock & roll dreams became reality, including playing on several platinum-selling recordings. All of these educational experiences have shaped me and are present with me in my work today. 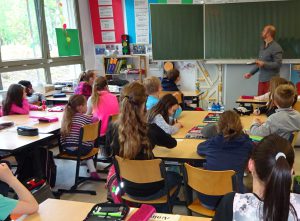 As a storyteller, musician, and teacher, I believe that people of all ages and backgrounds can both sing and tell a story. It is a joy and blessing for me to be able to assist in enabling people to discover and develop their voice.